"Wipe Your Feet, Leave Your Ego At The Door & Come On In" 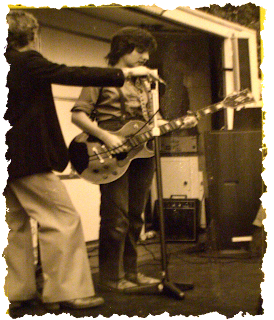 Since dinosaurs walked the earth & reel to reel recording was the only way to roll I've been making music in one form or another and made my debut in Cassiobury Park, Watford singing originals at the tender age of 13, It was such a windy day the guy hosting had to come on and hold the mic from spinning around, so more comedic than rock n roll, but it was a great crowd and a memorable day and I still have that guitar.  I can't say my dress sense has improved any, but  I have gained a wealth of experience over the decades and give up my time to support artists and bands, whether it be advice or writing a review.  The Music Reviews  originally started life out of  my writers head & Column Runnin On Empty at the Watford Observer newspaper that I wrote for 9yrs, where amongst the various features I supported new music. It was  a popular global feature so when I left the newspaper I decided to continue with it.

I only review every now and then because it has to be something mega special that hits the spot  & tickles the  ear drums whatever the genre.  I no longer take submissions, but you will often find me perusing Twitter and Facebook looking  for that  something special, so feel free to come and say Hi.

Check out this talented bunch, all with a live link so you can take a look at their reviews, listen to their Music & Show them your support by Following & sharing ........

Reggae:
Road Man-Light At The Speed Of Life Album