So picture the story if you will? Girl from one band and boy from another band who happen to know each other meet up and chat  about recording a Christmas song that girl has written ...fast forward 10yrs ( And I thought I was slow?)  girl, a.k.a Vocalist/Guitarist Louise Eastlock stumbles upon the song again and  writes  a new verse especially for 2020 , only this time she books a studio too and calls upon boy, a.k.a  Bassist  Matt Newman and they called upon Drummer Toby Balson and backing vocalists Sophie Gregory and  Krysia Newnan and The Eli-Lillies were formed and the song "Christmas is the  season of Love"  finally got recorded...Hurrah! But wait,... that wasn't the end? 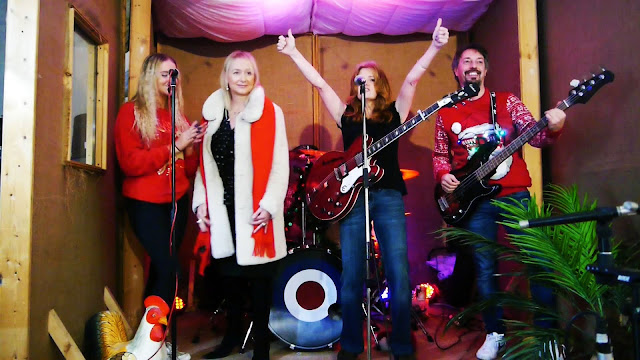 The band who describe their sound as Brit/Pop, Indie 90's say the song is an anti pill shaming song that encourages  people to get the help and treatment they need and deserve If their  brain doesn't produce  enough neurotransmitters on it's own.  As the lyrics state: "With the right drugs, Christmas is the season of Love" The band are hoping their single will help to end pill shaming and the stigma that surrounds mental health, and will be making a donation to mental health charities.

With  Mental health in crisis and soaring suicide rates, I'm sure this track will be like a welcome supportive hug right now amidst the Covid chaos being played out online and off? As many of you know my brother took his own life in 2015 after a bout of depression? The pain it leaves behind is undescribable, every moment of every day. It didn't have to be that way and it doesn't have to be that way for any of you suffering right now,If you broke your leg you probably wouldn't think twice about taking a pill for the pain, it's really no different for a broken mind?  As the band sing " With the right medication, Christmas can be such a fun celebration"  no truer word spoken, so if you're suffering please know it's okay and reach out and get some help so you can feel good again?

The Single is being released on all platforms on the 18th December but pre release is available on ITUNES right now, so I hope you'll head on over and do your bit for mental health and in the meantime spread the song and the love, after all, Tis the season?  You can check out the bands Website  & Social media Facebook  Twitter & Instagram
Til Next Time, Stay Blessed
Back Before Elvis