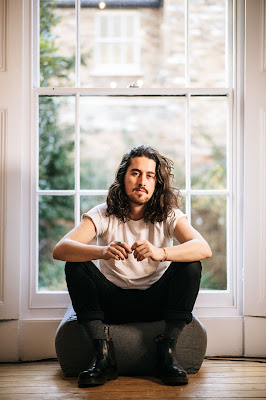 I'm sure we've all had those moments when we hear a track and  it starts with such great musical promise that we stop what we're doing and allow that rush of  excitement to rise up from our toes to around the midway mark in anticipation, and then the vocals come in and hope and everything else drop quicker than an elevator ride at Disney?  Well thankfully that's not the case with Alex Francis. Alex is one of those Singer/Songwriters that could warble about a chip butty and make it sound sexy & credible. Already a fan of this talented chap based in London but originally from Hitchin after I reviewed him back in in 2017, I couldn't wait to get my ears around his forthcoming 4 track E.P Live In Munich, and boy it doesn't disappoint .


The first acoustic soul track "Make Believe" had me melting within 30 seconds via accomplished musicianship and vocals that slid down like honey, Just as Opera singers can shatter glass via a high pitched frequency, Alex's rasp & gravel combo can, I believe shatter a heart of glass. I was totally absorbed for all 3.56 mins, but that's true to say of all his tracks. Next up  "Human Nature"  and what a surprise?   With his take on the Michael Jackson hit, it sounded familiar but so different that it took a few minutes to register.  It's an excellent choice of cover, allowing  Alex to do what he does best, wrap his honest, emotional tones around each lyric, it was another 3.27 mins that ended too soon.

(Performed on Mel C's Tour Bus) when you can whip out a guitar and sound like this , I'm sure you'll agree, you know you're witnessing someone and something very Special?  And It's rare moments like this that remind me of why I started writing  Music reviews.

Track three  "Whatever Happened"  and Alex creates the kind of  intimate  atmosphere where  you can hear a pin drop and leads us appropriately into  "Desire" as we're treated to an  acoustic chilled intro that includes a sprinkle of Womack and Womack -Teardrops, before continuing with his own song and a bowlful of soul that will have your ears tingling, as if that wasn't enough, my excitement gauge rises to orgasmic heights with an unexpected rock guitar solo that even Hendrix would be proud of before dropping back into the chilled vibe you become accustomed to with Alex. And it's over, the E.P is at an end but  I immediately hit track one  to start over.

For someone that only introduced himself  onto the scene in 2016, he has certainly packed  an impressive amount into these last few years from guest Vocalist on Mel C's  "Hold On" in 2017 which then saw him being invited onto her UK tour to promote the single and album:

He went on to perform at the Isle of Wight Festival supporting none other than Phil Collins. In 2017 he caught the attention of Stereophonic's front-man Kelly Jones who invited him to support the band on their 2018 European Tour. He also made his  Mad cool Festival debut in Madrid where he opened for Alanis Morrisette and ended his Summer touring with Sting in France, Luxembourg, Germany and Switzerland, not the usual summer for a lad from Hitchin ? but then Alex isn't your usual musician, a proficient Songwriter and guitarist  he has that extra something that can't be taught or bought. Whilst doing all this, he's also managed to release 8 singles and  three E.P's, soon to be four with "Live In Munich"  to coincide with a string of London performances, well worth catching if you get the chance?  Live In Munich is available from 3rd April. Here's the Pre Save link  which means you lucky lot will grab yourselves a bonus track.

If you like good Music then please show support by sharing.
Til Next Time, Stay Blessed
Back Before Elvis